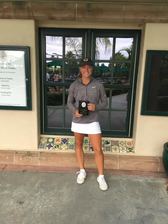 Solid JMG representation at NorCal Sectional Championships in most age groups, and a cool article on one of our promising “young guns.” Sterling Davies has been putting in numerous hours on the court, at the gym, and in the swimming pool to become better tennis player, athlete, and competitor! Sterling got 3rd place in the boys 12’s tourney being outplayed only by the eventual winner in the semifinal round. In the boys 18’s draw, our recent University of Arizona commit Eric Hadigian dominated the tournament up to the final match, and eventually settled for the 2nd place. Klara Kosan beat #1 seed in the girls 18’s tournament before claiming 3rd place in both singles and doubles. 12-year-old Saahith Jayaraman stayed strong through the boys 14’s event, and after losing to the #1 seed in the quarterfinals, battled to get 5th place. Other JMG quarterfinalists included Nav Dayal (5th boys 12’s, 2nd in doubles), Priya Nelson (5th girls 16’s), Zach Lim (6th boys 18’s, 2nd in doubles), and Libby Griggs (7th girls 14’s).