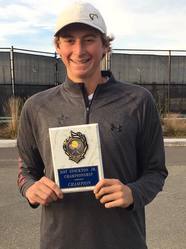 Another JMG dominated event at Stockton past weekend. This time it was a championship, and the girls 14’s tournament saw two of our academy’s players in the finals, #1 seed Alexis Johnson and Priya Nelson. Priya ultimately took the title and is now in a streak of two won events in a row. Eric Hadigian stormed past everyone in boys 18’s draw, while Ravi Nelson beat every opponent but the #1 seed in the finals to claim 2nd place among boys 16’s. Gabriel Lopez and Avery Nguyen also made a strong appearance in the 12’s age categories and won a few rounds. Great to see our young athletes competing on a weekly basis!