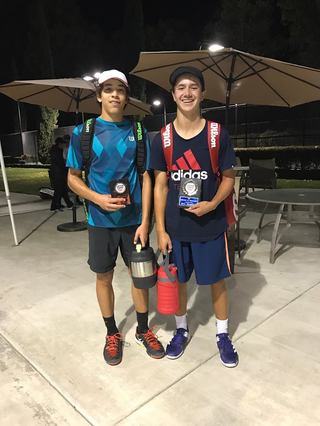 Lots of great results from JMG players this long weekend. To begin with, several players travelled to Level 2 National tournaments and did some damage in different age categories. Mason Nguyen, currently #19 in the nation in his age group, reached the finals in doubles among boys 12’s in Lakewood, CA and recorded 4 out of 5 wins in singles before getting the 5th place. Eric Hadigian went to Honolulu, HI and settled for the 5th place as well after going 4-1 in boys 18’s singles matches. Eric, now a junior, was ranked as high as #51 in the nation this year. Klara Kosan competed in Stockton, CA in girls 16’s draw and claimed 3rd place in doubles after also reaching the finals of back draw in singles and recording some solid wins.
In addition, our players dominated local Championship tournaments ranging in location from our home club at Arden Hills to Diamond Hills in Oakley to Seascape in Aptos. The Nelson siblings, Ravi and Priya, both won 16’s singles draws. Alexis Johnson reached the finals of girls 18’s draw while Marshall Leung settled for the third place in the boys tournament. Alexis Nguyen and David Ginzburg claimed the 5th place in girls and boys 12’s draws accordingly while Nav Dayal and Trevor Fong squared off in a match for the 3rd place among boys 12’s with Nav taking the win.