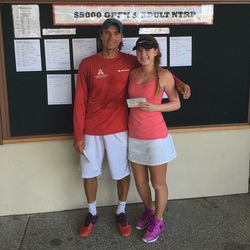 ​This week’s Johnson Ranch $5,000 Open gathered a lot of talent. Kassidy Jump captured another women’s singles title after defeating opponents from UCLA, Saint Mary’s, Sac State, and others. Kass and
Dan DeLeon also reached semis of mixed doubles. Austen Huang was the runner-up in both singles and doubles partnering with Coach Jimmy. Camille Favero was the quarterfinalist in singles and finalist in doubles, while Jessi Muljat was also singles quarterfinalist and picked up mixed doubles title with Coach Anton