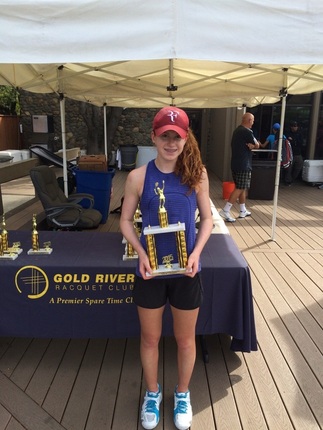 During the first weekend, Jessi won 4 matches including a tough quarterfinal over the two seed, Mariko Linuma. Jessi won the first set 6-3 before dropping the second 4-6. In the deciding set Jessi saved a match point at 4-5, and ultimately won 3 straight games to close out the match. “I was too content playing defense in the 2nd and 3rd sets. The way I played the match point I saved was how I should have played the whole match, more offensive”.

Jessi faced a familiar player, Rachel Eason in the finals. Eason had won 4 of their previous 5 meetings. Muljat said “ I was very excited to play her in the final. I had a great week of practice and felt really good.” Jessi’s confidence showed as she took the first set 7-5, “After winning the first set, I felt really comfortable the rest of the way”. Jessi put away the match winning 6-4 to secure the title, “I was relived and proud to get over a hurdle”

April will be a busy month for Jessi, as she will travel to Southern California for the International Spring Championships and The 2015 Easter Bowl in Indian Wells. Good Luck Jessi!!

In other news from Gold River, Seriana Saltzen played very well and made it to the G18 Semi-final. Priya Nelson placed 5th in G12 and Alexis Johnson won the Consolation Draw in the G12 division.