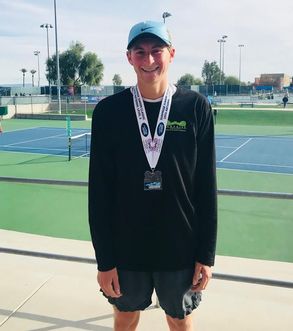 January brought action in several Level 3 National Tournaments. Traditionally many JMG players traveled to compete on the National stage in several age groups. Eric Hadigian brought gold from Surprise, AZ in boys 18’s. On his way to victory he defeated several quality players including the finalist from Winter Nationals. Alexis Johnson lost in the finals of Girls’ 16 and proved that she is ready to successfully compete on the National stage.
Locally Jake Blumwald, Robin Sharma, Nav Dayal and Paul Yulayev are still in the main draw of Championship in Stockton which is in its second weekend.