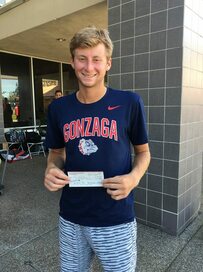 ​Gonzaga bound Eric Hadigian continues his progress towards college and competes regularly at ATP events, as well as on men’s open tour. Eric stayed undefeated in the last two tournaments he played, both in singles and doubles, while claiming three titles. Hadigian first was victorious at Natomas $2,000 Men’s Open in singles several weeks ago, and this past weekend he earned wins in both singles and doubles (partnering with Stefan Cooper) at $2,500 Los Gatos Men’s Open. Eric’s future team currently enjoys 14-7 season record.