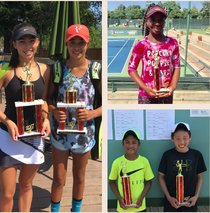 Priya Nelson made it to the finals in the Girls 16s singles, unfortunately she fell short, but that didn’t stop her from taking home the Girls 14s doubles title! Aniyus Pierre made it to the playoffs in both the Girls 12s singles and doubles. Mason Nguyen with a solid effort, reaching the Boys 12s finals, with Alexander Frantzis not far behind in the playoffs, with a solid three set win. Jake Blumwald and Saahith Jayaraman also had a great run, getting to the playoffs of the Boys 14s in doubles.