Favero Has a Cavalier Attitude 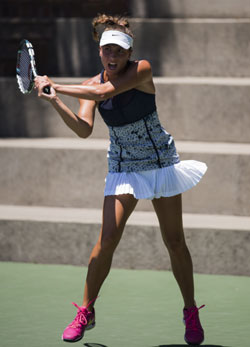 The 17-year-old senior at Laurel Springs online school has maintained a 4.2 grade point average while developing her skills as a classically trained violinist and volunteering with special needs children as part of her community service for the National Honor Society. Oh, and she also plays tennis, training up to 25 hours each week at JMG Academy in Sacramento, California. Her current practice schedule is fit for a high-level junior, but that wasn’t always the case. Favero’s father Eric, a recreational player, introduced her to the sport when she was six years old, but she didn’t receive formal instruction until age ten. Even then, her weekly private lessons were hardly the stuff from which college scholarships are made.
“[When I first started playing tournaments], I thought, ‘Whoa, a lot of these girls have a lot more experience than me,’” Favero said of her competition in Northern California.
Undeterred, she shifted from a local club program to a more rigorous routine at nearby JMG Academy after entering high school. One year later, she left her private, all-girls school for an online education, spending more time at the courts with her coach, Joseph Gilbert. Before long, she had her sights set on playing Division I tennis.
Favero’s mother, Nancy Roycroft, likened her daughter’s delayed rise from casual player to Blue Chip recruit to the tale of the tortoise and the hare. Favero agrees.
“Once I figured out that I could hang with other girls and play at a high level, my confidence grew,” she said. “I feel like getting into it later helped me because I hadn’t yet reached my peak, and I had so much room to grow.”
Her relentless pursuit of excellence off the court mirrors her style of play. “I was the one running behind the baseline for hours,” Favero said with a laugh. “I do like to hit hard and try to end the point, but if it got down to it, I was going to run that extra ball down.”

There was just one problem.”For a while I definitely struggled with the mental side of the game. I was constantly doubting my abilities. I almost had stage fright when I went out on the tennis court.”
She started seeing a sports psychologist during her junior year and, little by little, learned to unlock a newfound belief in her game. That, along with improved technique, led to a tangible jump in her recruiting ranking from No. 40 at the end of 2014 to a current rank of No. 18.
As a result, there was no shortage of college programs interested in her tennis. Favero had just one requirement when it came to choosing a school: She wanted to leave the west coast in her rear-view mirror.
“I’ve lived in California my whole life – same city, same street,” she said. “I really wanted a new, different experience. I was pretty much open to anything else.”
After visits to Texas Tech, Vanderbilt and Virginia, she decided to make a cross-country move. From the campus to the coaches to the cognitive science major she’s set on pursuing, UVA checked all of her boxes. The fun sushi dinner with the team didn’t hurt either.
“Eating with the girls [was the highlight of my trip],” she said. “They all got along really well, but what struck me was how everyone seemed to connect not just because they played tennis, but because they genuinely liked each other.”
Favero, who describes herself as “a goofball and a perfectionist,” knows team chemistry will be key as the ninth-ranked Cavaliers lose six seniors at the end of the 2016 season. But she enjoys the prospect of building a new team foundation with coaches Mark Guilbeau and Troy Porco. Thanks to her “tough love” relationship with her current coach, she’s prepared to be pushed.

“I’m really excited to be on a team that is shooting for a National Championship,” she said, acknowledging that the UVA tennis pedigree demands excellence. “I tend to work pretty well under pressure. [Guilbeau and Porco] are strict coaches who know what they want, but my coach now is also on the stricter side. He knows what everyone’s limits are, and he pushes us to reach those limits and goals.”In addition to Favero’s ever-growing list of activities and achievements, she also makes time to teach some of the younger children at JMG Academy. Now that she’s successfully navigated junior tennis, ending up with a scholarship at a top Division I program, she has some advice for the next generation:
“I would tell them to have as much fun as possible – that’s when the best results come. Tennis is a game and shouldn’t feel like work. Not every day can be perfect, but if you keep working hard, you’re going to reach your goals.”