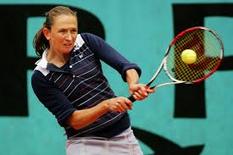 April 26th, 2018 –
​
We are super excited to announce that Elena Likhovtseva, a former Grand Slam Champion and top 10 WTA player, will be joining our staff next week!!! Elena is bringing such a rich and versatile set of expertise and knowledge to JMG, our players are very lucky and eager to start working with her. With Australian Open and Wimbledon titles under her belt, Elena was one of the best doubles players in the world, climbing as high as #3 in WTA rankings. As a singles player, she was ranked #15 at her peak with wins over such players as Serena Williams, Maria Sharapova, and Kim Clijsters. As a member of team Russia, Elena also won Fed Cup (the World Cup) in 2004. Welcome, Elena!