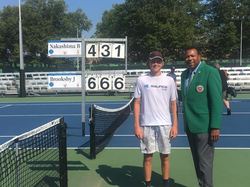 JMG history has been repeated after five years this Sunday when Jenson Brooksby won the Junior National Championship in Kalamazoo, MI. By winning the most prestigious junior event in the country J.T. booked his trip to the main draw of the US Open starting this month. After not dropping a single set Jenson set himself up for the finals against Brandon Nakashima of Southern California. In the only national tournament final played in best of 5 sets format he showed no doubt he was going to let his lifetime opportunity to slip away. In another dominant performance Jenson ended his run with another straight set victory.
After winning the Easter Bowl early this year J.T. earned his second Gold Ball (awarded to national level 1 tournament winners).
After Collin Altamirano who won the national championship in 2013 Jenson is the second JMG player making it to the US Open main draw.

In Alabama Priya Nelson lost in the quarterfinals in Girls 14s’ division which turned out to be her only loss in the tournament. She went on to win the remaining of her matches and ended her great run in the fantastic 5th place.

This year was another record breaking for JMG with over 20 players competing in the national championships throughout the whole country in all age divisions.